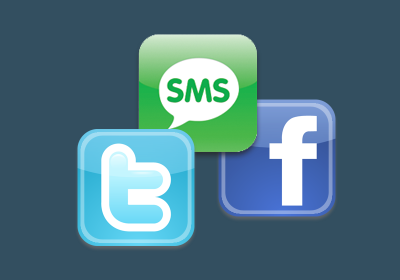 To me, the major difference is intent; intended audience and the intention behind all submissions.

Twitter is, nominally, a micro-blogging platform. Blogging (as most readers are no doubt aware) os a form of content generation, whereby bloggers write items called ‘posts’ which are published in a chronological and/or categorized manner for the consumption of zero or more readers. Unless readers are using an RSS feed, they will not be aware of new posts, unless they check the blog manually. In addition, bloggers are not inherently aware of who is reading their blogs (although some blogs will attempt to track reader numbers and locations. However, this is not an inherent part of blogging).

Twitter differs in a number of respects. First, it is a micro-blogging platform. Posts (or ‘tweets’ as they are known in the world of Twitter) are limited to 140 characters. Anybody can read your tweets (unless you elect to protect them), but people can elect to follow you on Twitter. When they do this they will automatically be made aware of your tweets through the client they are using to connect to Twitter.
Twitter also has a much more explicit sense of dialogue than blogging. You can ‘reply’ to a tweet and the original tweeter will be made aware of it. It will also be clear to everyone who is looking that you responded.
In addition, you can ‘directly message’ a Twitter user. This is more private and remains between you and them.

So, how does Twitter differ from SMS? Well, SMS messages are also 140 characters long (this is not a co-incidence…), but that’s really where the similarities end. An SMS message is intended for a single user and also sent to a single device. ‘Direct messages’ notwithstanding, tweets are for all to see and can be accessed by anybody who has a Twitter client… at any time.

How does Twitter differ from Facebook. They share some characteristics; Facebook’s News Feed is a form of micro-blogging and anybody can access your Facebook data (within the restrictions that you set). But, Facebook has a heavy focus on applications and on explicit networking. Twitter is positioned as a communication channel, whereas Facebook is trying to be all things to all men. This isn’t a criticism, per se, rather an observation of their differences.

For me, Twitter has proven to be a great way to reach a wide audience to let them know about events I’m planning; it’s also a great way to maintain a constant low level of contact with people I know, rather than the bursty level of content that email or telephone calls result in