Anyone who has spent time developing web-apps with Dojo will have found the need to associate their own functionality with the raising of events and calling of methods on other objects that may not be within their control. Dojo allows developers to attach Listeners (callback methods) to Actions (DOM events or object method calls) in order to allow such wiring.

Some of you may have stumbled across an issue whereby a Listener has been attached to an Action, but isn’t being called when that Action executes. This article explains what’s going on an how to avoid it.

Throughout this article, you’ll see me using the AMD style of module use. That is, I won’t be referring to dojo.methods. If you’re not familiar with Dojo’s AMD, take a look at this article about the Dojo Loader at some point. Until then, don’t worry: all this affects for this article is what the method calls look like; the internals are the same.

Take a look at this code and see if you can figure out what the output will be:

Here’s what you will see in your console:

First, let’s look at the wiring…

Prior to Dojo 1.7, this was all handled by the connect module. Since the advent of Dojo 1.7, this functionality has been split out into the [on][] module for event-handling and aspect module for Aspect Oriented Programming (AOP) advice giving. Indeed, the 1.7 version of connect.connect() is essentially a wrapper around calls to on() and aspect.after(). First, let’s look at connect

If you take a look at the connect API, you’ll see the method signature:

`obj`
This is the object that fires the Action. It might be a DOM node or just a plain old object. It can be omitted, but we're not going to worry about that here.
`event`
This is the Action that was mentioned above. It might be an event; it might be a method name. Either way, it's just a String that represents the Action that we're interested in connecting to
`context`
This is the context in which the `method` will be called. Basically, the context of a method is the value that is returned if the method refers to `this`. If no context is given to `connect.connect()`, then the context will be set to the event's context.
`method`
This is the function that will be called after the Action takes place. This can be a Function object (i.e. a reference to a function) or it can be a String. If it is a String, then the function that is called is `context[method]`.
`dontFix`
Don't worry about this. It's not relevant to this discussion.

If you’ve already moved away from using connect.connect(), you’re probably using lang.hitch() yourself, to ensure that your Listener is called in the context of its providing object. Here’s where you can get into problems. To understand why, though, lets look at how aspect.* works.

The Dojo aspect API defines three functions: before, after and around. They have very similar signatures:

`target`
This is the object that is being targeted with the advice.
`methodName`
This is the method of the `target` that is being targeted with the advice.
`advice`
This is the function to be called at a time indicated by the `aspect.*` method. More often than not, this will be a method that has been hitched to another object.
`receiveArguments`
This just controls whether the `after` advice receives the arguments that were passed to `methodName`

The way that Dojo handles this is to create a dispatch Function that creates a linked list of Function objects. The before advice comes first, then the targeted method, then the after advice. A little more work is needed for around advice, but the principle remains the same.

How it all works 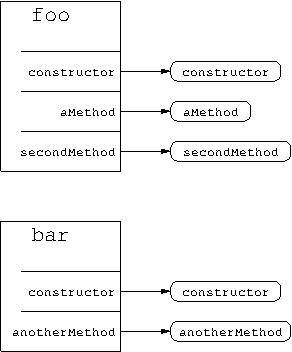 In the next diagram, we create our reference to bar.anotherMethod. When this happens, Javascript looks to see what bar.anotherMethod points to and points barAM to that. The little bar on the arrow tells us that this is a hitch and that the context for this call will be bar.
At this point, you can see that a call to bar.anotherMethod and barAM will be identical. They point to the same Function object and will be called with the same context. 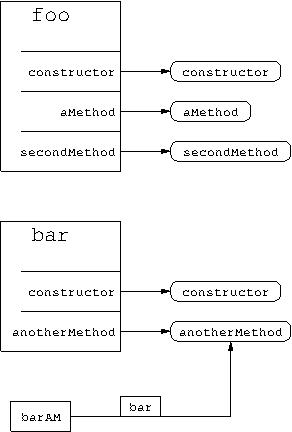 Next, we perform our connect, which is just an aspect.after. Here’s where the problem kicks in.

Now, we add our second hitch: 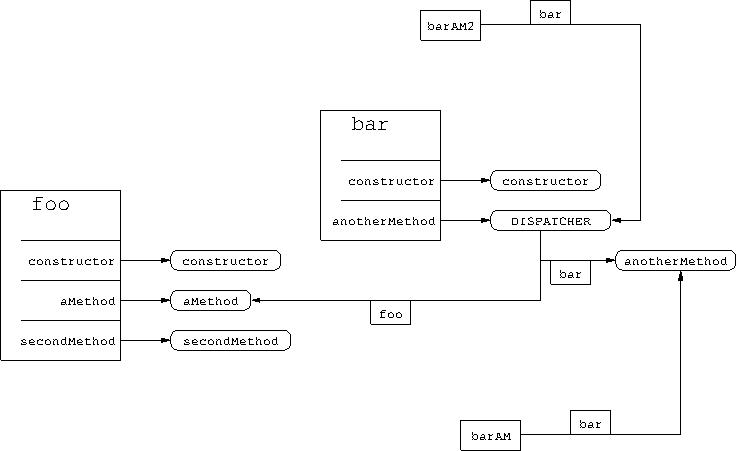 Now, bar.anotherMethod is pointing to the AOP dispatcher, so that’s what barAM2 points to. When we connect our second method: 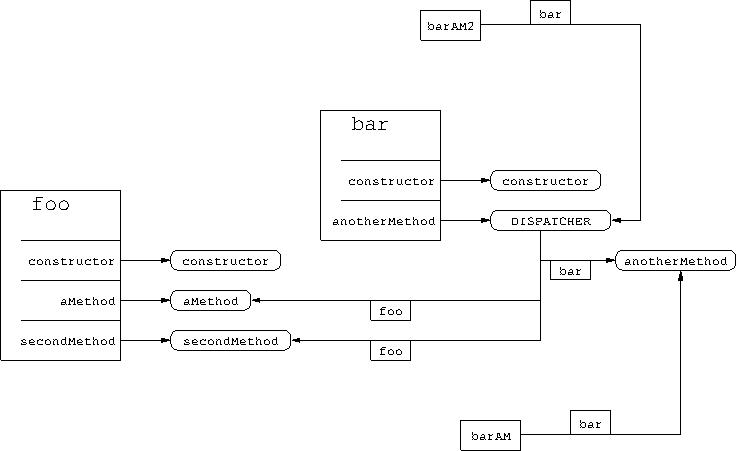 bar.anotherMethod and barAM2 are still pointing to the same thing. That explains what we saw in our console. Once AOP advice has been attached to a method, any newly created references to this method will see any advice attached after that reference is made

So what conclusions can we draw here?

The crucial one is that any references made to an object method before connections are made or AOP advice is attached will, when called, NOT result in these attachments being called.

Since the very nature of web-apps results is asynchronous, you often cannot guarantee the order of execution of code. In addition, future modifications to your code base, could result in these incompatible hitches and connections being made. This can lead to very tricky bugs.

So how do we avoid this? Luckily, it’s really easy. hitch allows you to provide a method as a String, rather than a Function. When you do this, your reference points to the method in a different way: 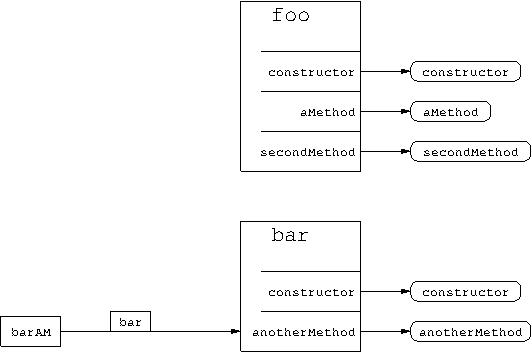 Any time you make a call to your hitched Function, it has to look up bar["aMethod"]. Therefore, any changes to where this points are picked up by your hitched reference. This does have a minor penalty performance, but it makes your code way more robust, so it’s worth the cost.

So, in summary: whenever you create a hitch, either explicitly, or (as in the case of connect) implicitly, do so with the method as a String, rather than a Function. If you don’t, you may end up observing unexpected behaviour, once AOP comes in to play.